Originally installed in 1958, Dominion Power’s pulverized coal-fired boiler system was in need of a retrofit. The task at hand was the replacement of the steel piping system used to convey pulverized coal from the grinding table to the burners. Eight of the 16 discharge pipes were taking a beating and needed to be replaced as a result of the extremely abrasive nature of the pulverized coal pneumatically conveyed through the system.

Although the current retrofit only called for replacement of half the piping, this was the third replacement project in the boiler’s 50+ years of operation. A complete replacement of the piping system had occurred in the 1970s, and again in 1998. During the last retrofit the system was upgraded to one of the toughest abrasion-resistant pipes on the market.

However, Dominion Power’s experience with its piping system is anything but unique. Instead, it speaks directly to the extremely abrasive nature of the fine, pulverized coal and its devastating effect on the inner wall of the pipe as it is pneumatically conveyed.

As fine coal particulate is forced against or slides along the inner wall, the shearing action can wear a channel or hole in the pipe over time. This can lead to significant maintenance costs and even unscheduled downtime for pipe repair or replacement.

For a highly abrasive application such as pulverized coal, mild steel pipe is simply not tough enough to stand up to the abuse for more than a year or two.

“Mild steel is inexpensive, but it’s not going to hold up over time,” says Greg Fynan of Stone & Webster, the service engineering-construction company hired to handle the retrofit in 1998 and again for the current project in 2011. “It isn’t less expensive in the long run because the labor costs to change a piping system are astronomical.”

Fynan estimates it would take two weeks, two shifts a day with 15-20 workers per shift during scheduled downtime to replace the piping.

As a result, a number of “abrasion-resistant” options have come on the market. Based on the principle that the harder the inner wall is, the better it resists the gouging or plowing action of abrasive particles. Abrasion-resistant pipe is often rated on the Brinnel Scale of Hardness (BHN). Whereas standard steel pipe rates a relatively “soft” 120 BHN, A-R (abrasion resistant) steel pipe measures from 200 BHN through 800 BHN. Options such as iron cast or basalt-lined pipe are also available.

As the engineer assigned to the project, Fynan also oversaw the initial replacement of the entire piping system in 1998. Complicating matters at the time, most of the existing pipe segments were constructed with some kind of bend, even multiple bends, in a relatively small area. This precluded the possibility of rotating the pipe to compensate for wear, a common practice.

“When we looked at it in 1998, the Ultra Tech product was not only extremely abrasion-resistant, but it could be delivered with bends that matched the original piping systems,” says Fynan. “There aren’t many companies bending 12” abrasion resistant pipe.”

For its Ultra 600 brand pipe, Ultra Tech begins with a steel pipe manufactured to a proprietary chemistry, followed by induction heating, and finally water-quenching the inner surface to create a single-wall pipe. The induction-hardened pipe can last up to 3-8 times longer than mild steel, with only a moderate price increase.

At a very hard 600 BHN measured on the Brinell Scale of hardness, the inner wall of this pipe is highly abrasion-resistant. The hardness tapers to a 250 BHN on the outer wall that is ductile enough to be cut and welded in the field, and can accept the standard end options of flanges, weld rings, and couplings.

The same technology is used to create long radius bends. Ultra Tech is able to induction harden the pipe during the bending process, so they can vary the arc radius of the pipe from 20” to 180” and handle multiple pipe diameters and wall thicknesses.

However, due to the abrasiveness of the coal used at Dominion Power even a 600 BHN inner surface has a finite life span, particularly in the bends and elbows where it takes the most abuse.

“The pipe eventually wears out mostly in the bends,” explains Fynan, adding that the coal being used is also much more abrasive than in the past. “I would say 10 years is a reasonable life span, even for the Ultra Tech product given the abrasive nature of the process.”

As a result, the current retrofit required replacement of only half the pipes in the system.

As part of his due diligence, Fynan considered other abrasion resistant pipe alternatives previously unavailable in 1998 including basalt-lined pipe. Basalt is a naturally occurring igneous rock that can be molted and cast into shapes while retaining hardness between 8 & 9 on the Moh’s scale. Basalt-lined pipe costs almost three times as much, but can last perhaps 15 years under the same conditions, according to Fynan.

Basalt-lined pipe had another major drawback that was a deal breaker. The pipe has a larger outside diameter to compensate for its lining, which would have necessitated a complete re-engineering of the piping system while adding significantly to the cost.

“With a basalt-lined pipe you might get 15 years, maybe more, but the premium price wasn’t worth it – particularly when we would have had to redesign the entire system,” says Fynan. “It would have been a nightmare.”

Ultimately, he decided the best solution was the Ultra Tech 600.

“When you take everything into consideration, this induction-hardened, abrasion-resistant pipe was the way to go for this application,” adds Fynan.

Abrasion-resistant pipe has many other applications at coal-fired power plants. Steel piping systems are widely used for the conveyance of coal ash slurry to nearby settling ponds, the transfer of limestone slurry to absorber spray towers for removal of sulfur dioxide (SO2) and hydrogen chloride (HCl) from flue gases, and for transporting away the calcium sulfate by-product of the flue gas desulfurization process. 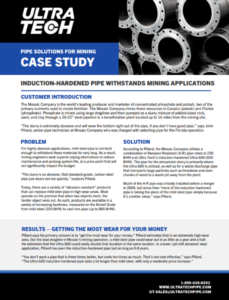 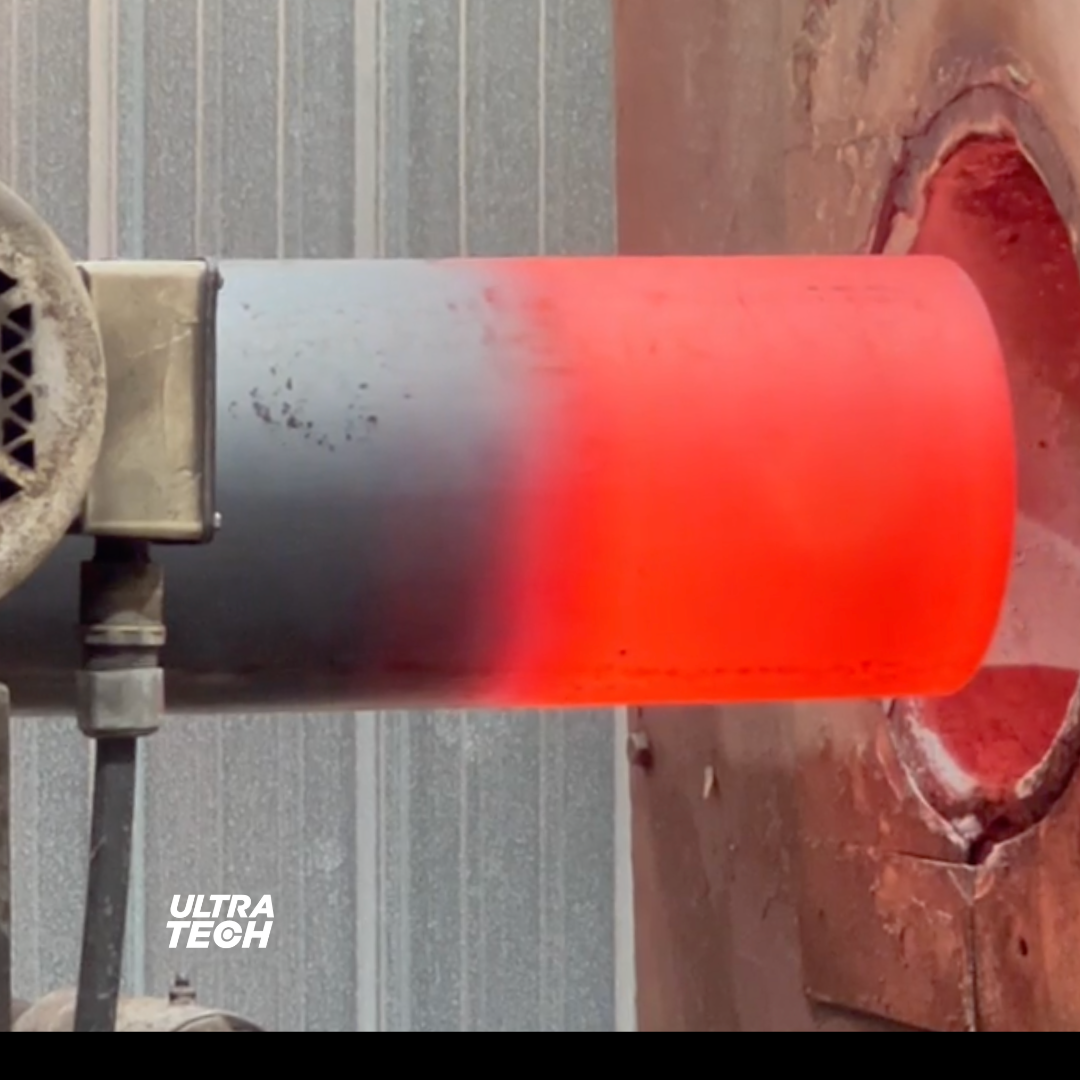 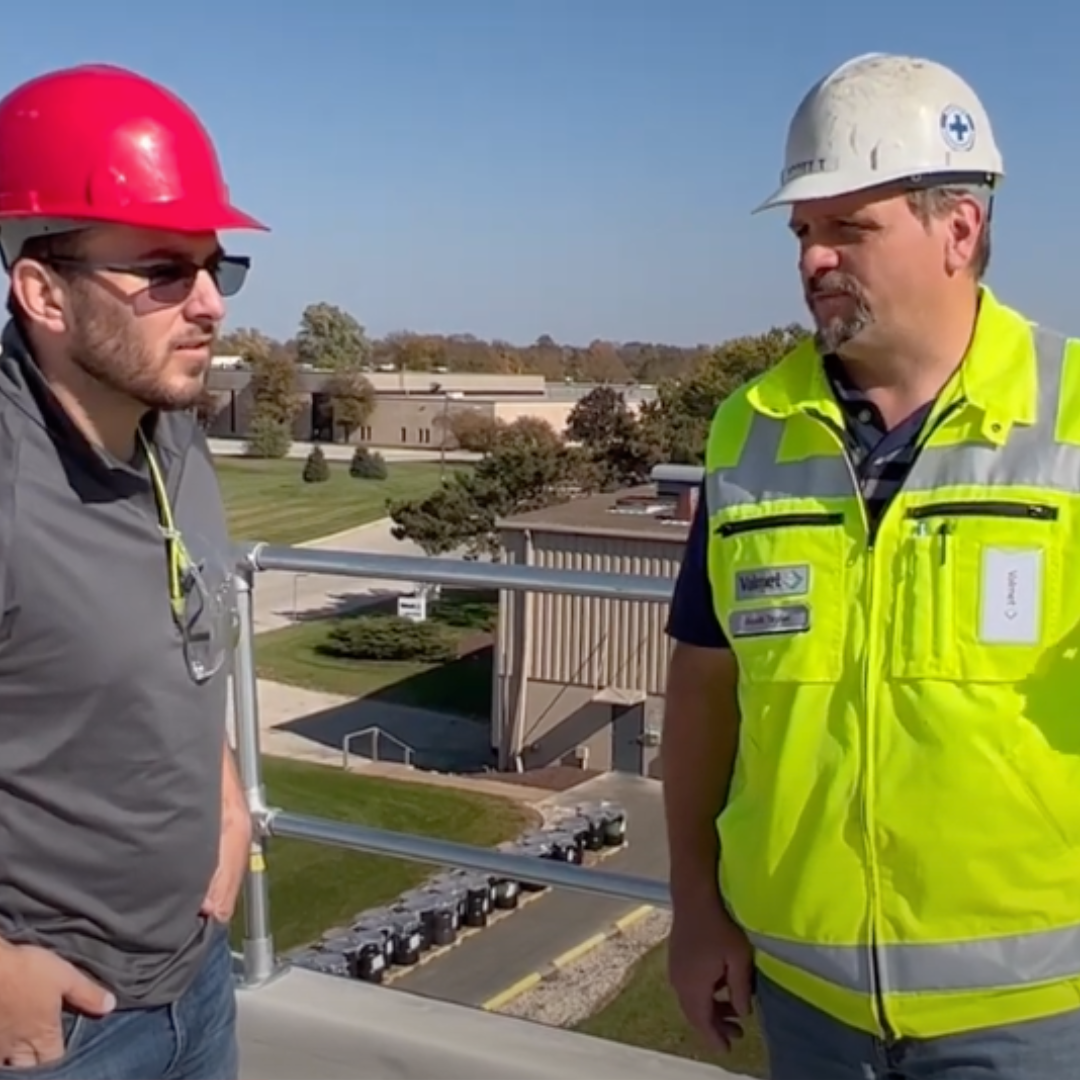 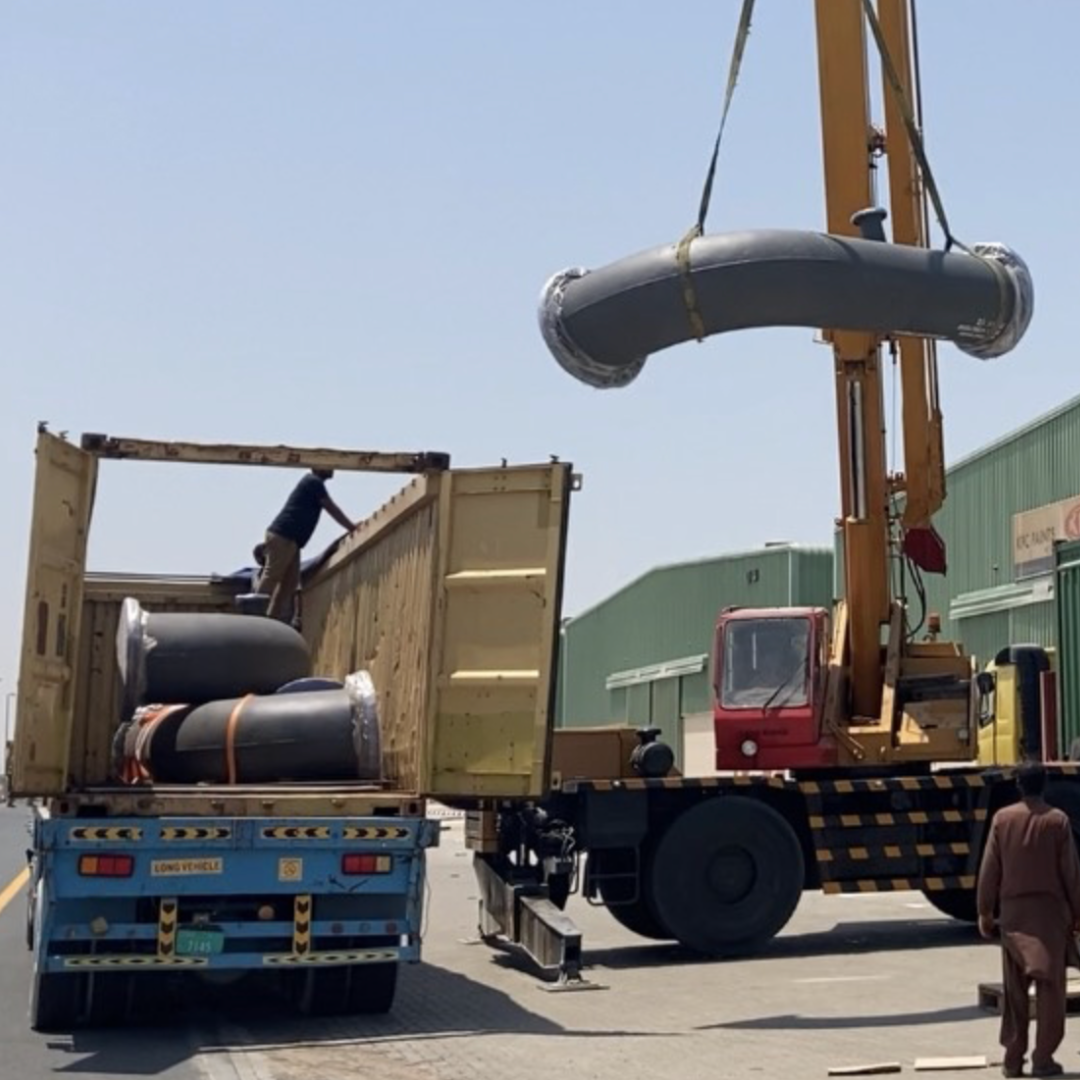 get the latest news
from ultra tech